I found myself in a situation back in January, and this situation had multiple facets.

Firstly, I realized that the calendar in my phone was doing a mediocre job of keeping me up-to-date on appointments, engagements, soirees, etc. etc. I’d enter stuff into it, but I had like two or three separate calendars going and reminders and all sorts of other stuff, and it just wasn’t cutting it.

Secondly, I knew I didn’t want a planner that was just a planner. There needed to be additional reasons to truck it around, otherwise it was just gonna get left at home. Planners by themselves are boring. Planners with widgets and add-ons? That’s the ticket, right there.

Thirdly, I understood that I like rockin’ things DIY style. Little crafts projects are right up my alley, though they are typically limited to sewing my own bags for tarot cards and shit involving washi tape.

These three factors, my friends, is what led me to look into Midori traveler’s notebooks.

There was an additional factor, one that is such a common element that I almost overlooked it in writing this post. The secret fourth factor is that I’m a cheap bastard.

This is why I balked at dropping fifty dollars on an actual Traveler’s Notebook from Midori, especially since it only came with one insert and nothing else. This led me on a journey to find something more suited to my spendthrift taste, and eventually I found the September Leather’s Traveler’s Notebook. Which, if I understand the vernacular correctly, is a fauxdori–that is to say, it follows the format of a Midori traveler’s notebook, but it is made by a non-Midori company, which means it is not technically a Midori.

But “Finding Midori” sounds a lot better than “Finding Fauxdori”, so here we are.

The nice thing about the September Leather Traveler’s Notebook was that it came with three different inserts: grid paper, lined, and unlined. It also didn’t have that weird metal dongle in the back that I could foresee getting in the way of regular writing.

Yeah. I said it. I didn’t like the dongle.

The one error I made was in ordering an actual Midori calendar insert, which ran me about twenty dollars and took three point five trillion years to arrive, having been posted by some kind soul named Yuri in Japan. I have since come to know the DIY philosophy of the traveler’s notebook well, so I fully intend on either making my own calendar insert or purchasing a calendar insert from Etsy once the grim darkness of the year 2018 CE has run its course.

Once the notebook arrived, I almost immediately put in an order for a kraft paper folder insert to go with it, because doctors always give you your next appointment on a business card and dammit those just disappear sometimes, so it would be good to have a place to tuck them away.

Of course, I almost immediately tried to cram too much into one of the folder’s pockets, so that pocket is now held together with masking tape and half a prayer. 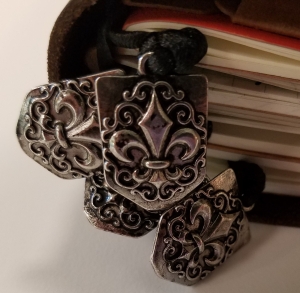 Once the kraft paper folder was added, I decided that I needed bookmarks to help me keep track of where I was in the grid paper, lined, and unlined inserts, as well as one to help me track the current month in the calendar. This led to me fixing up bookmarks out of black cord and little metal fleur-de-lis shield charms.

This is easily one of my favorite little DIY touches, just because of how classy it looks. I probably could’ve done ’em up cleaner with the knots and such, but honestly I think that the imperfections are part of the charm.

I did found out after a few months that I wasn’t a fan of trying to write in the inserts while they were still tucked into the traveler’s notebook, so I’ve gotten into the habit of slipping the inserts out for writing time and then popping them back in afterward. So far it’s worked pretty well.

Basically, I’ve got zero regrets about finally picking up a traveler’s notebook after hearing about them for so damn long. And, on top of everything else, I now have an actual planner to physically write things in. Which was really the whole reason the rigmarole started to begin with, so what can I say? Mission accomplished.

View all posts by JW Dickson